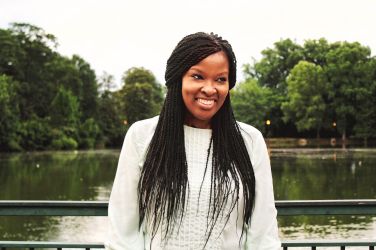 Blogging is an interesting thing. It’s one part entertainment, one part information, and two parts stream-of-consciousness rambling. I hope to find a way to cleverly combine all of these aspects to inspire, encourage, and maybe even make you laugh.

Let’s start off by getting to know each other a little bit.

Although I call Atlanta home now, I’ve lived across the U.S. with a stint in the Caribbean. A true miracle baby, I was born at just twenty-four weeks old. I’ve had my share of health problems and thirty (yes – 3-0) surgeries and counting. I grew up on the west coast, just outside of Seattle in the homogenous heart of Microsoft country.

I grew up on the west coast, just outside of Seattle in the homogenous heart of Microsoft country. I was one of just a handful of Black kids in my school, with glasses, a noticeable tracheotomy scar, and super protective parents. Needless to say, as the female Steve Urkle of the Pacific Northwest, I was prime fodder for bullying.

Though I experienced a lot of challenges early in life, my childhood was also filled with a lot of joy. My mother, father, and I have always been a tight-knit trio. Weekends in Canada, trips to Disneyworld, and nights filled with music and laughter all added light to an otherwise dim experience.

Despite the conflict I encountered in school, I loved to learn and my parents always encouraged me to do my absolute best. They exposed me to culture and nature and everything in between. My gift for storytelling began at an early age when I wrote my first nonfiction piece in the third grade. The same year, my parents also enrolled me in acting classes, where I caught the performing bug. Despite doctor’s early prognosis of being unable to speak or walk, I also took ballet and gymnastics classes, and learned to ride my bike and swim!

About a month before my fifteenth birthday, my family and I packed up and moved across country to every Black American’s personal mecca – Atlanta, Georgia! Freshman year of high school I discovered public speaking in my English class. I volunteered, played the clarinet, and did what teenagers do. Senior year, I took sociology as an elective and that class set the course for my future.

As a sociology major at Georgia Southern University, I chose an emphasis in social services. My parents have always been shining examples of faith through service. They taught me how to open my heart to those in need and I decided to make a career out of the practice. Unfortunately, after my sophomore year of college, I found my pursuit of sociological studies interrupted when my father suffered his first massive stroke.

Unfortunately, after my sophomore year of college, I found my pursuit of sociological studies interrupted when my father suffered his first massive stroke. I already intended to take a semester off from school, so I simply extended my hiatus until the following year, when I returned to GSU and completed my bachelor’s degree.

After a series of contract, temp, and retail jobs, I was determined to earn my master’s degree in social work and start my own non-profit benefiting bullied adolescents. But in 2013, my plans were derailed again when my mother was diagnosed with Frontotemporal Dementia and I became her full-time caregiver.

Five years later, and here I am.  Still a caregiver. Writer. And an unexpected advocate for change. My life isn’t exactly where I thought it would be by this time in my life, but I know it’s exactly where it’s supposed to be.

This blog will take you on a journey as I chronical my life as a caregiver, a millennial, and an adultish person trying her best to live life with purpose and joy.

Keep an eye out twice per week for new content on everything from confidence boosters and healthy living tips, to book reviews and awesome causes.

Well, that’s enough about me. Tell me about you!

No, seriously. Tell me about yourself.

2 thoughts on “My Story”